History of the Bra

The history of the bra is intertwined by the evolution of fashion, the changing views of the female body, but also with politics of war and the preference of the male public.

An extended version of this research has been published in the issue nº 15 of The Funambulist magazine dedicated to clothing politics in 2018.

This strategy has been used in the video research of the history of bra. It shows, on the nude layer, how the brassier have been developed during years and how the history of this garment is not only related with intimate atmospheres. That is why politics of diverse arenas such as war, feminism, developments in engineering and preferences in the male gaze has been brought to the Nude Maja’s room. 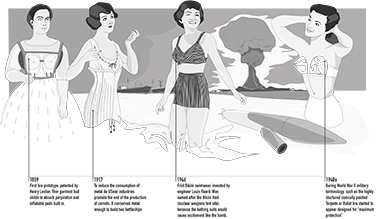 It wasn’t till 1917s that women starting to use bras, not because the corsets were causing struggles in their vital organs, but to reduce the consumption of metal. Due that corsets’s structures were made of metal, the US war industries promoted the end of the production of corsets and the country conserved metal enough to build to battle ships.

First bikini swim wear was created by the engineer Louis Réard. It was named after the Bikini Atoll, the nuclear weapons' text site, because the women in suits caused the same excitement than the Atomic Boom did in the male gaze.

During world war II military terminology such as the conically pointed torpedo or bullet bra started to appear designed for “maximum protection”. 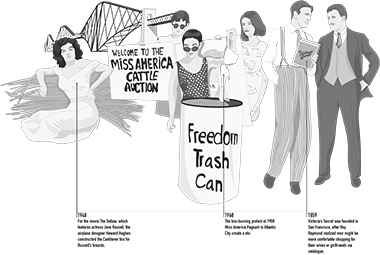 The millionaire engineer Howard Hughes constructed the Cantilever bra, he based in the structure of the Cantilever bridge. This bra was created for Jane Russell’s breasts when she acted in the film The Out Law.

The burning bra protest was held at the Miss America 1969, they protested with a large flag with women liberation and burnt bras into the freedom trash can on the Atlantic City’s Broad Walk.

Victoria’s Secret was founded in San Francisco after Roy Ramond realised that men might be more comfortable shopping underwear for their wife or girlfriends via catalogue. 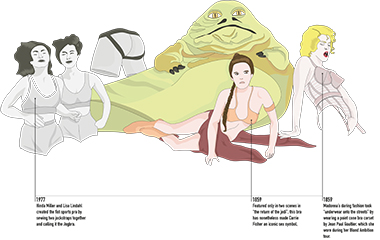 In 1977 Hinda Miller and Lisa Lindhal created the first sports bra by sewing two jockstraps together and calling it the Jogbra.

Featured only in two scenes in The Return of the Jedi, the iron bikini has nonetheless made Carrie Fisher an iconic sex symbol.

Madonna’s daring fashion took underwear onto the streets by wearing a pointed corset by Jean Paul Gautier, which she wore during her Blong Ambition tour.