The purpose of this project is to subvert an everyday object for perverse purposes. It aims to create a production machine of dissident sexualities through queer appropriation of Corrala Mesón de Paredes, thus introducing a political object of resistance and confrontation against standardization in the Lavapiés neighborhood.

This project has been published in the issue Protocolos by the independent publishing platform Bartlebooth in 2017. In 2018 it will be part of the exhibition Becoming in the Spanish Pavilion at Venice Biennale of Architecture. 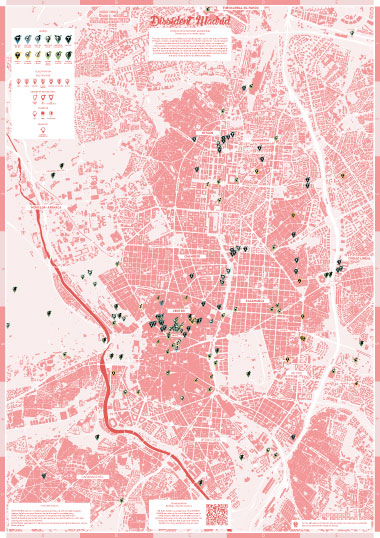 This map includes non-normative sexual practices that take place in the center of Madrid. Swingers, cruisers, prostitutes and hustlers —and their customers— are participants of these practices which do not fit into the heterosexual regime, monogamous relationships or non-economic contract of sexual relations. The practices outlined here take place in spaces that have been appropriated by dissident users by giving them an ephemeral and different use than the preassigned, or spaces specifically designed for a type of sexual practice despite having a license that does not consider all its different activities.

This map aims to:

MAKE VISIBLE the non-normative sexual practices, not only through its spatial location but also temporal location, hence the need for crowdmapping.
NAME (THEM) as an inclusive gesture of recognition and empowerment.
ENABLE dissident appropriation of new spaces by incorporating them on the map, creating new nodes on the network.
ENCOURAGE participation in diverse sexual practices showing alternatives to conventional practice. 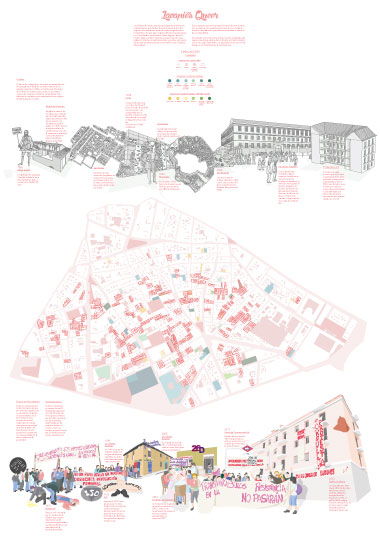 Corralas
Embajadores neighborhood is the most representative of the courtyard housing typology. From a study conducted in 2004 by the Municipal Housing it follows that it is the neighborhood with more corralas in Madrid. Jaime Santa Cruz Astorqui has made a record of 180 corralas in his doctoral thesis.

Queer movement
Queer is not an identity but it is a post-identity movement that appropriates an insult.

In Spain the queer movement emerged in Lavapiés in the 90’s by the hand of the political groups Radical Gai and LSD. The Radical Gai was formed in 1991 by ex-militants of COGAM who decide to dissociate from the institutionalized gay/lesbian movement because of their passivity by the AIDS pandemic. And LSD appeared in 1993 as a queer-dyke group, initially with some components that during the 80’s were part of other groups: feminists, lesbians, extra-parliamentary left, etc.

There was an interest in establishing a network of networks with other political groups that also questioned the dynamics established in the areas where they moved, like squatters, feminist groups, objectors, neighborhood associations, etc.

Third wave>Feminism(s)
A rethinking of feminism took place by those who did not feel represented in it. The third wave of feminism is more fragmented and plural. It incorporates components of queer theory, of antiracism, postcolonial theory, ecofeminism, transsexuality, and a positive view of sexuality.

Aaron Betsky understands for queer space the deviated use and deformation of a place, the appropriation of buildings and city codes for perverse purposes. In addition, Betsky recognizes two types of queer spaces:
1. The closet, a mechanism for hiding, like the gay sexual encounters in men private clubs in the 19th century.
2. And the mirror, a mechanism of camouflage, where space becomes normatively gay, like pink neighborhoods.

But those spaces have been generated “by the cultural condition experienced by gay men in the West during the 20th century”. We need an alternative for minority subcultures.

This project proposes the queer appropriation of a corrala (courtyard housing typology). The corralas are already inherently perverse spaces, places where privacy is partially exposed or shared in community. For that reason the queerization of a corrala advocates a third strategy: the visibility and confrontation.

The corrala of Meson de Paredes offers a perfect symbolic location for the strategy. It was planned a closed corrala; but the block was never completed and half of the built corrala was left exposed to a square. 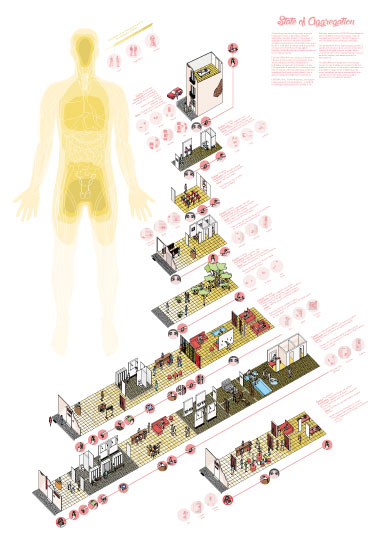 Taking as reference the ESOAD © of Jan Kapsenberg, these diagrams aim to identify the three main states —search, negotiation and contact— that participants of non-normative sexual practices go through.

The development of this ritual process can vary in spatial and temporal extent, and the demarcation between their areas may not be clear, rather emerge into each other creating hybrids. Areas of transition between two states can also be distinguished.

The ESOAD© set of diagrams forms a design manual for gay facilities. Once again the field of academic research, in this case architecture, it is limited to the gay, white, middle class and urban subculture making the dynamics of other subcultures of minorities such as lesbian, transsexual or transgender invisible.

This project proposes to focus on perversions.

Perversion is a term used to describe the behavior or sexual practices in which the predominant source of pleasure is not in copulation. Perversions challenge the centrality of the penis as the only sexual producer/receiver.

These groups have in common with the phases of Jan Kapsenberg the organization of physical space depending on the kind of relationship with another subject.

Some of these practices have been translated into a spatial device, except those which do not include as a condition consensus of the two —or more— subjects involved.

We should speak not of queer space but of queer appropriation of space.

It is not about building new, fixed and immutable spaces, even if they meet the expectations that anyone could have of a queer space. The critic and historian of contemporary art José Miguel García Cortés said that these places can only exist while they are being built because, once it is created, they can be institutionalized and they lose much of the features that make them differential spaces.

This performative and processual character is present in the activism and artistic practices of transfeminist networks in Spain. Do-it-yourself and self-management are their ways of production and survival.